Mixed Light
To start with, you generally have to understand "mixed light".  Often in a scene there are two (or more) types of light.  One might be fixed (moon light, city lights) and another is variable (fireworks, flash lights, on camera flash).  The goal is to balance them.  Ironically, balance rarely means equal - generally you want the exposure of one light to be roughly 1/2 to 1/4 of the other.  A few examples:

Here a cave entrace (outdoors) is balanced with the lights built into this cave display.  Balance is achived by how much of the scene is shown - more of the cave (the yellow part), the less green outdoors shows.  Here it was just luck that they were roughly the same brightness.

Here there is a fixed light source (the sun coming through) and a variable source (my flashlight back filling the scene).  The flash light was on for about 4 seconds at the end of the scene to fill in the cave.  If I had not used the flashlight, the cave would be too contrasty - you couldn't see the walls.

It took 6 minutes to get enough star/city light to get a sky filled in. The flash light filled in the tent in 6 seconds.  This would be an easy photoshop fix (there is complete darkness between the sky and the tent) but I didn't do that - promise!

Perhaps the hardest example of balance.  The city has one proper exposure (say 6 seconds at f8).  The fireworks are variable in time but not aperature.  If you open the aperature (say 3 seconds at f5.6) the fire works trails will burn, if it's too closed (say 12 seconds at f11) the fireworks will be too thin.  Balancing this is hard.

Cities (30 seconds or less)
Cities have a little bit of everything in the for light.  They are generally pretty simple to expose - you are balancing the city against another element - generally a sky or a foreground element.  Generally you are trying to pick up as many colours as possible.  Of course you need a tripod or solid support for any photo this long.

Fireworks (4 - 12 seconds)
One of the most fun types of night photography is taking pictures of Fireworks.  I have a page of just fireworks photos, but here are some favorites:

Fireworks are a great way to burn film.  The formula I use is f8 for 100 asa film with a 4 to 12 second exposure.  The exposure is hit and miss - using the bulb feature on the camera and a cable release, open the shutter when it looks like the fireworks will be good and hold the shutter open for as long as you need to fill up the image.  (A tripod is a must - a clamp works in a pinch.  If you can't support the camera, don't bother).  Blue fireworks are difficult to capture (they are dim) and green fireworks are generally the brightest.  Ideally, you want to combine low and high fireworks in one frame, but they don't have to be shot at the same moment - just inside the 4 to 12 second window you have the shutter open.  I shoot two to three roles of film each time I attend.

If you are using 200 speed film, use f11.  400 speed film, use f16.  If you get the aperture wrong, the fireworks will burn in to much or be two dim - you can't compensate by longer or shorter time.  Like anything in photography, once you get good, get closer.  Here that means zoom in.  We are still at f8, but now we are in the < 4 seconds range.

Sparklers (3 seconds)
Another fun pyrotechnic source of light is sparklers.  They are often available with birthday cakes and at Halloween.  I have a page from one experiment, but here are some favorites:

These exposures were about 3 seconds long at f16 on 400 speed film.  (f8 on 100 speed film).  The trick here was to use a flash set on rear curtain sync (the flash fires at the last moment before the shutter closes).


Campfires (6 - 30 seconds)
Campfires provide a nice light.  The two pictures below are about 6 seconds in duration on 50 speed film at f1.4 - just enough to light up the people.  (It was actually metered from the camera)

But it doesn't have to be that dark.  You can use a bigger fire and mix other light sources.  First, taking photos just after the sun goes down, you can pick up the residual light.  Second, you can hide a lantern to light people up.

Or you can just expose longer.  Using 100 speed print film, f4 at 30 seconds yields a very different picture.  The people have blurred out a little but the background has been lit up by the ambient light.

Flashlights ( 120 seconds )
Without a sun, you can leave the shutter open fairly long and compose how you want.  This picture is a 2 minute exposure at f1.4 on 50 speed film.  I set the camera on a tripod and with the shutter open used my flashlight to paint in Andrea.  Once I painted here once, she moved and I painted her again.  It was lots of fun!  No on board flash was used - the light is hard, bright and difficult to control.

Star Light ( 300 seconds )
Stars aren't very bright this far away.  These two pictures are 5 minute exposure at f1.4 on 50 speed film.  Unfortunately, city lights often overwhelm stars so getting a good photography is often an issue of geography.

The trick is to keep the aperture at maximum - stopping down will make most of the stars disappear.  The longer the exposure, the longer the trails.


Moon Light ( 300 seconds )
While visiting the Grand Canyon, I decided to take a night photo - roughly 5 minutes at f4 on 50 speed film.  While I couldn't see very well, the film picked up something I missed - a forest fire on the north side of the valley.  The smoke has descended into the Canyon - there a was a park notice the next morning.  I haven't had another chance to use moon light, but I'll keep looking. 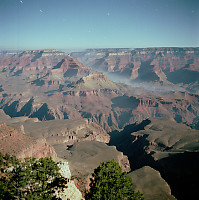 hey it says all that stuff in seconds and asa.. im not quite sure what ASA is.. but can you explaIN asa, and seconds in digital form? i dont know if its the same or not
jc
Thursday, May 10th, 2007 at 17:49:24
ASA is another name for ISO =)
Munapong
Sunday, May 27th, 2007 at 02:51:57
Thanks for the great tips; it made for a fun evening!
Dan
Wednesday, July 4th, 2007 at 23:02:51
Very nice photos. The fireworks are really spectacular! The city shots are probably my favorite, though. The contrast between the city lights and the way they light the night sky is interesting, to say the least. Very inspiring.
Jesse
Monday, January 7th, 2008 at 21:55:54
What is the advantage of using 50 speed film over 100 or 200 for example?
Briana
Monday, April 14th, 2008 at 16:47:00
I used 50 speed film because that was all I had loaded. Slower film generally is sharper, but with long exposures you get more blur which shaper film doesn't help with. Apparently, some slower films start to get color casts with extreme exposures. If you do want longer exposures (say for motion blur), slower film means you don't have to use such high apertures to get the time.
John Harvey
Saturday, April 19th, 2008 at 11:42:22
This info was excellent thank you and the picture were great .
Gail Douglas
Wednesday, June 25th, 2008 at 05:47:47
Thank you for being so helpfull. Night photography has became my recent hobby. I live on the sailboat and love the place I live in (the Yacht Club). Nights here are allways attractive subject for photography.
John Czura
Wednesday, July 23rd, 2008 at 19:03:21
It's difficult to find a great read like this these times :) wonderful examples too.
Kasparas Anusauskas
Sunday, October 19th, 2008 at 14:28:17
Thank you so much for the tips! Happy 2009!
Makarios
Saturday, January 17th, 2009 at 04:53:10
hi there - I love this site and your advice. I'm a beginner and can't wait to try these techniques out. One question though - when you say that you can paint a person in using the flashlight. Does this just mean that you turn it off, get them to move, shine it on them again, turn it off, get them to move etc etc. Never used a flashlight before so this sounds really interesting to me. Thanks.
alison smith
Thursday, February 5th, 2009 at 12:06:42
A nice resource for beginning night photographers John! Fuji Velvia is getting scarcer and scarcer as they are trying to switch film photographers to the new Velvia 100. I have had mixed results with Velvia 100 and still prefer to shoot 50 when I can get it. Andrew
Andrew Prokos Photography
Saturday, February 7th, 2009 at 11:15:28
A man who shares his photography experience through simple steps and tricks when everybody does not do so or does only when get paid. Best wishes from this beginner.Keep going further!
Dani Gorgon
Friday, February 27th, 2009 at 11:30:48
Brilliant site and very inspiring! Loved your examples and how you did them! Very useful and great photos! Thank you!
Simon Taylor
Friday, September 18th, 2009 at 01:04:50
Thanks for information, my friend asked me to shoot her son's bar mitzvah party around a campfire and I just told her it couldn't be done without additional light.
Lois
Thursday, October 1st, 2009 at 16:02:02
Useful information and great pics !
FotoStefan
Thursday, January 7th, 2010 at 11:09:21
I can not wait to try your tips. Thank You
La Vonne Gunn
Tuesday, March 2nd, 2010 at 18:43:31
Great information on fireworks exposures, thanks!
Michael
Sunday, March 7th, 2010 at 22:54:48
Very nice! thanks you so much. I learned many things.
IvanSam
Monday, April 19th, 2010 at 12:35:36
Wow, great pictures. I loved the city shot with all the lights from the different buildings, but, my favorites were your fireworks pictures, really cool. Thanks for putting them on the web.
Lisa G.
Thursday, April 29th, 2010 at 18:45:19
Hey this website is great! I have a couple of questions. I have black and white film and is 3200 iso how long should i leave the shutter speed open, and I have 800 iso color film so how much time do you recommend?
Thanks
Carolina
Thursday, June 10th, 2010 at 20:48:18
Nice pictures.. what are the lenses you used for the fireworks photographs. I have a NIKON D5000 with a 55-200 lens and it saying the subject was too dark this evening when I was going to take the July 4th fireworks.
Jolly James
Sunday, July 4th, 2010 at 20:48:18
Hi, I'm just wondering in the photo in 'sparkles (3 seconds)'. Why your hand doesn't blur, is it because you are using a long pyrotechnic stick?
Richard
Monday, September 27th, 2010 at 02:33:16
I need help on useing the right film and the proper setting on my F-1Canon 35 mm for football night games
Michael
Wednesday, October 6th, 2010 at 19:08:03
Richard - during the 3 second exposure, only the sparklers are recorded (because they are bright) for the first three seconds. The flash goes off just before the shutter closes and records a still snapshot of everything else.
John Harvey
Thursday, July 7th, 2011 at 21:43:57